Anytime someone begins the journey to the North there is a rollercoaster of emotions to go through. You will feel fear, dread, excitement, anticipation and wonder to name a few. What makes it an easier transition is to make friends when you arrive. They will provide the necessary support and sage advice you will need to adjust to your new surroundings.

The second person I met when I got of the plane was Terry Girouard. The big fellow with the long hair and scraggly goatee met me with a friendly smile and a helping hand with all the luggage. I found out the next day that his cubicle was close to mine and I stopped by after introductions to thank him for helping me with the luggage. We soon learned we had much in common and a friendship quickly developed.

A couple months ago Terry went to the health center complaining of sever pains in his side and was soon medivacted to Iqaluit for more test. Soon after that it was off to Ottawa for even more test. I seen his wife Barb walking and stopped to ask how Terry was. With tears in her eyes and a shaking voice she told me he had oesophagus cancer and it has spread to his liver. Barb and the children were leaving immediately to fly to Ottawa to see Terry in the hospital.

After a brief battle Terry died last night around supper. He was a lot of things to many people. A husband, father, son, brother, musician, poker player, co-worker. To me and many people in Cape Dorset he was, and will always be, a friend. 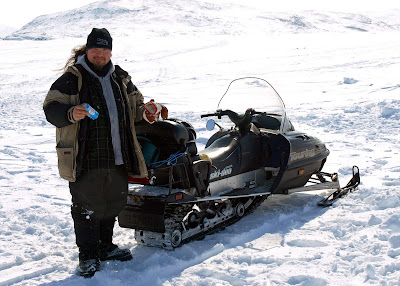 Terry left an inprint on everyones heart, he will be remembered fondly by every one that he came in contact with, the north is poorer with his passing, God bless his family and friends

Sorry to hear about your friend. Judging by that picture and what you've had to say about him, he must have been a great guy.

So sorry to hear about the loss of a friend. I am glad you, and so many others, have such fond memories of him.

I don't know him or his family but I am very touched by his story. From what a great friend he was to you and from his friendly picture, I am sad he passed away. RIP Terry.

Some of the greatest times of my life were spent with Terry. In his last email he wrote to me from the hospital, he asked me to call him. Sadly, I didn't get around to it. And that's something I'll have to live with. RIP my friend.

This is a beautiful tribute to your friend.

I met Terry when we were in high school, I guess I was maybe 16. He invited to come play in his band and we became great friends, rehearsing several times a week, playing the bar scene in downtown Toronto, spending time in the studio, and on the road travelling.

Terry was a bear of a man and an imposing figure, but at the same time was one of the most gentle, warmest, grounded souls I have ever known.

I'm shocked and saddened that he is gone so early in life. My deepest condolences to to Terry's family.

So sorry to hear of the loss of your friend Terry. He no doubt will be missed.

Matt, Wayne and to Terry's Wife and Family my deepest sympathy! I did not know him but when my family is sad and hurting, I hurt to. It sounds like he touched many hearts and I am sure God has a special place for him now. You will all be in my prayers!

Sorry about your friend, Terry! He really enjoyed snowmobiling and being out under the sun in the snow I guess! I enjoyed your blog photos this morning!
Kind regards from EAGAN daily photo in Minnesota