Last night, just as I was getting ready to hit the hay, the northern lights showed up over the city of Iqaluit. I snapped these photos from the 5th floor* of the Frobisher Hotel. I don't have a tripod with me so I braced the camera in the window and kept as steady as I could. Most of the photos turned out okay.

I think the large light circles you can see all over the image below was caused by light entering the rear viewer from the room behind me. All of the photos were taken looking towards Frobisher Bay. The bright white glow are apartments and the North Mart. The details will be a bit blurry because the camera was hand held. 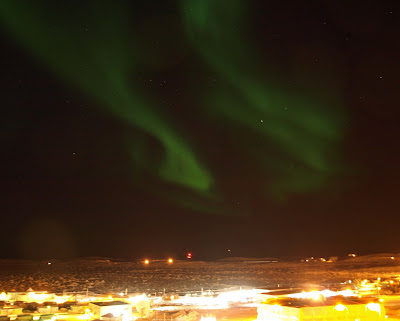 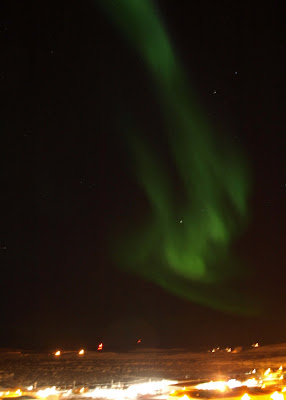 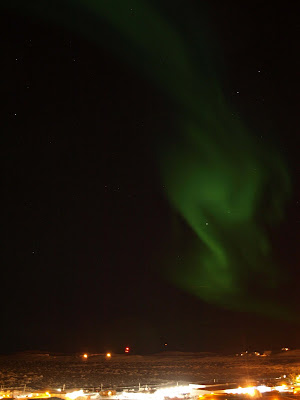 You may notice in the photo below a dark line cutting across the northern lights. The line is a shadow caused by the exhaust of a passing airplane. When I noticed the line developing in earlier photos I thought something was wrong with the camera. 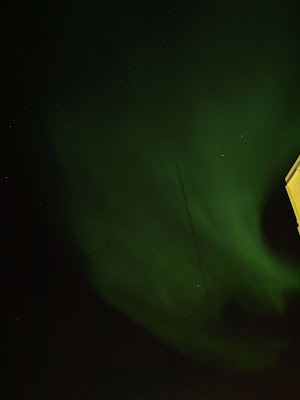 Note: My apologizes to anyone who may have looked up at the 5th floor of the Frobisher Hotel and seen a half naked, hairy, bit overweight fellow hanging out of the window. Okay maybe not that hairy.
Posted by Matthew & Michele at 11:01 AM

Thanks for this!!! Now I have to look up Cape Dorset in my atlas. And thanks for commenting on my blog, Collage Journeys.

>^•^<
Too beautiful!
Wish I could see them...one day, I hope! Thanx for sharing those lovely pix.
Beatrice
from Europe

Well Jane I don't remember ever commenting on your blog but as I get older my memory does start to leave me.

I did pop over (or back) to your site and it is nice.

Thanks for dropping by.

One thing I am missing this time of year are the lights. I took some pictures in the fall but I haven't seen them much since. Nice pictures!

i cant never good pics of them in iqaluit..great job!

Nice pictures, you didn't get cheated this time!