So finally my little brother is here for a visit. The best use of my Airmile points yet.

Mark has been in the north before with the Canadian military when he did Arctic survival training in Resolute Bay. He got some wicked looking frostbite on that trip. This should be a warmer more comfortable visit. There will be much snowmobiling.

He did get the classic welcome to travelling in the Nunavut when he was 20 minutes from landing in Cape Dorset on Monday and the plane went mechanical. Apparently they could have landed but would not have been able to take off with the malfunctioning gadget. He was then told when arriving back in Iqaluit they would be taking off at 4pm, then 5pm, then 6 pm and finally they said the flight was cancelled. After a brief argument at the counter, First Air gave everyone a free room at the Frobisher Inn and a discount on the meals.

Mom and Dad had no idea Mark was coming and it took the efforts of several people to make sure everything stayed hush hush. Dad was at the airport to pick up a fellow employee and took several looks before he realized that it was Mark standing in the airport. Thought he was going to have some tears. Mom got the surprise later at their apartment after I had to go on a search mission to find her walking around town. There was tears then.

Mission successful and thanks to everyone who helped out keeping it a secret.

Quote of the day “I learned a long time ago how to lie to my parents.”

The plane, the plane! 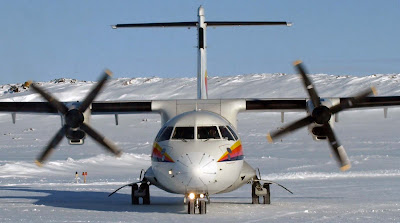 The first sighting of my little bro. 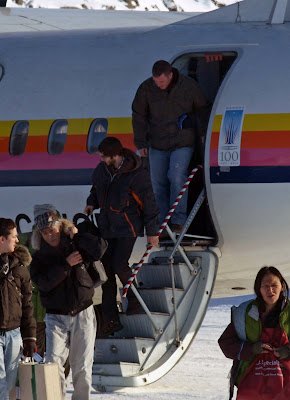 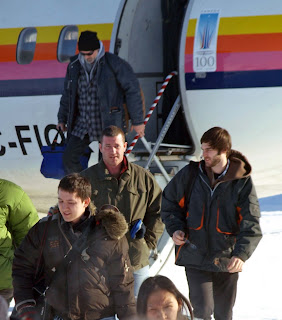 Unfourtunatly my photos when he got into the airport didn't turn out because there was to much jumping around.  There will be more photos over the next couple of weeks.
Good to have you here Bro!
Posted by Matthew & Michele at 9:26 AM

This is a happy story! Thanks for sharing it.

Awesome! I can't wait for family to visit me here.

MOM say's, "Don't make a habit of lying to your parents!"
How ever, since neither had a clue what you were doing-- technically--it wasen't lying. "Your parents"
appreciate all the sneeking around, co-workers co-operating--especially mine--if I had been working that day, you woulden't have had to run around town to find me--right Michele--hahahah
Thank you for being you, I guess I can say, " I love and appreciate you", here, since I'm your proud MOM!

I think that was awesome Matt that you pulled that off. I know Sue and Wayne really appreciated it and I am sure Mark was very excited to come and visit. You were once again united after a whole year apart. God love ya!