Nunavut Coat of Arms and Flag

I had an anonymous commenter on the previous blog post who stated the polar bear was on our coat of arms. That was incorrect and I did correct this person in the comment section. That of course led me to a couple of ideas for blog post. One was a post about anonymous commenter’s but that would have been a very negative post. The other was how many people don't know what the coat of arms or Nunavut flag is and the meaning of both. I chose the more positive of the two ideas.

Centralized by a circular shield of blue and gold divided by a horizon, the colors themselves represent the riches of Nunavut's land, sea and sky. Above the horizon sits the Niqirtsuituq, or the North Star. In a land of few natural landmarks and bearing markers, the North Star was vital for navigation. The star also symbolizes the leadership of the elders of the territory. The five gold circles beneath the star represent the sun as it arches above and below the horizon. In a land where the days and nights can be months long, the sun is a renewal of life when it reappears in the spring.


The Inuksuk, which means 'like a human' in Inuktitut, represents the stone markers used for centuries by the Inuit as navigational landmarks and to mark sacred and special places. The qulliq, an Inuit stone lamp, represents light during the long winter darkness and also symbolizes the warmth and reliance on family and the community. 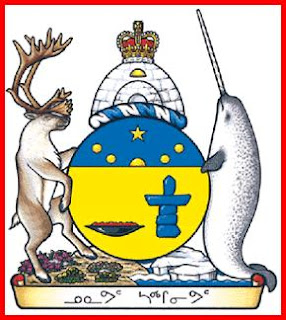 Set atop the armorial bearings is an iglu (or igloo), which represents the traditional life of the Inuit and their ability to survive in such a hostile environment. Above the iglu is the Royal Crown, representing Nunavut's inclusion in Confederation.

The tuktu (or caribou) and the qilalugaq tugaalik (or narwhal) which support the shield represent the reliance of the Inuit on the land and sea for their survival. They are part of the natural heritage of the Inuit. The animals stand on a base of land and Arctic sea. Three varieties of Arctic plant life are also included.

The Motto of Nunavut (which means 'Our Land'), written in Inuktitut and translates as Nunavut Sanginivut, means 'Nunavut, Our Strength'.

The inuksuk, which, in Inuktitut, means 'like a human', is a stone marker and monument, used for centuries to guide the Inuit across the barren Arctic tundra or to mark sacred and special places. The star is the Niqirtsuituq, or North Star, used for centuries as a point of navigation. It also represents the leadership of the elders.

This was very informative, thanks for the explanation!

great info, learn more on your blog than any where else--great history or georphy lesson

Rather nice place you've got here. Thanks the author for it. I like such themes and anything connected to this matter. I would like to read more soon.