There has been a large number of polar bears in the community this year. Three bears have been shot in the town in the last couple weeks. All were defensive kills as the bears were among the houses with people present. I have heard rumours there are 17 bears hanging around outside the community. Since my snowmobile is broken down (parts are coming) I haven’t been able to get for photos. The ones below were taken by Vimal one of the nurses. I have to admit I’m very jealous of the photos he has taken. Hope he doesn’t mind I played with them in Photoshop. Hope to have some of my own photos of bears soon. 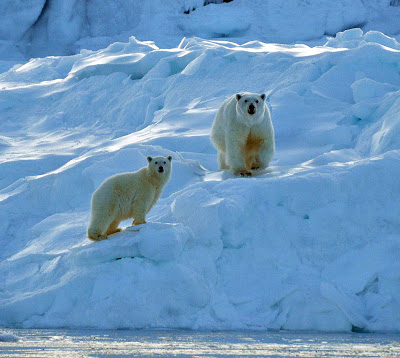 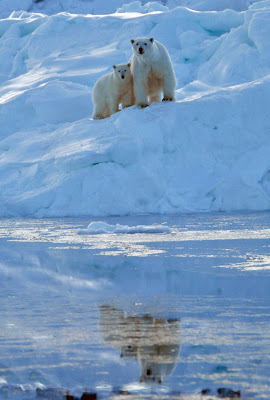 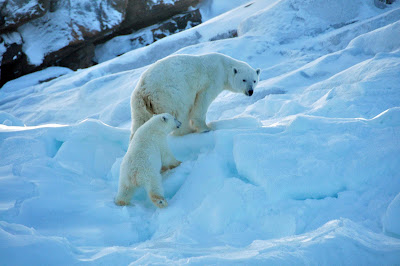 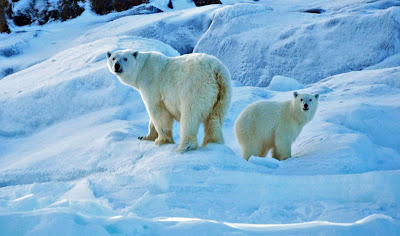 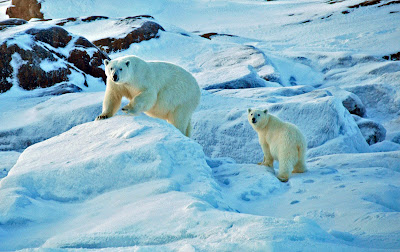 It's scary to have that many polar bears in and around town but HOLY CRAP those are good photos. Hope you can get some soon (but be careful).

Stay safe...when you go out to shoot your own shots!! :) Sarah

HOLY CRAP VIMAL those are great shots! Although he is CRAZY to get so close to the bears and floe edge! Don't bother going out of your way to get shots like these, you can get them at the zoo, no sense in risking your life. That's how I feel anyways. The best shot I ever got was of a little white furry bum diving back into the water, it was crap, wish I had a longer lens back then. lol

Wow, great shots. He could sell them to National Geographic.

I wonder if the bowhead whale carcass has anything to do with the preponderance of bears there this year. Nice shots Vimal.

There may be something going on with polar bear habitat & food sources in the Baffin... Or, perhaps garbages are not burnt properly. Or, may be locals are leaving leftovers from subsistence hunting in areas near the hamlet... The wildlife & the police needs to investigate.

Coming in close proximity may not be good either. The bears may get familier with humans & may show up in hamlets for easy meal.

It's never a good thing to shot to kill the animal that adorns NU's coat of arms. The bears could be darted & transported back to the land. Destruction of wildlife is never a good thing. The world has lost so many species already & many more are going to be extinct in the near future.

Polar bears are protected in the US (Alaska), Norway (Svalbard) & Russia (Siberia).

Don't worry Jen I won't be getting very close or going alone. I do have the monster zoom (600mm).

I would have to guess the whale carcass is the main reasons the bears are coming around. Even though there is only bones left the smell would be detected by the bears over great distances.

Hey Anonymous why don't you sign your name to your comment or register with Blogger. There is nothing wrong with what you have said but without a handle or signature it really doesn't carry any creditability.

With that said the answer is yes they have been drawn to the hamlet by food. (Whale carcass). I don't think polar bears will get used to humans the way bears in the south do. They have no natural enemies and there are very few humans living in the Nunavut Arctic. (33000 people spread out over 2 million square KM and all of them in 25 communities) The local wildlife officer does scare the polar bears away using bangers and firing shots. But when a bear is in town amongst homes, adults and children sometimes there is no alternative but to shot the bear in defense. Witch is the case in the three killings in the community.

Not sure what the coat of arms you have seen but the two animals on the Nunavut coat of arms is the Narwhal and the Caribou both are a large part of substance hunting and very tasty.

Great pictures! I have to admit to being incredibly jealous. Six years in Nunavut and due to extreme bad luck and timing I never had the opportunity to get any bear photos or when I did they never turned out right.

I have though witnessed a number of incidents in Qikiqtarjuaq where bears wandered pretty close to town and had to be scared off by wildlife officers. I can vouch from personal experience that they do everything possible to ensure a positive outcome with the bear leaving and no one (bears or people) getting hurt.)

Oh come on, lets not forget their tasty scrumptious meat! ;)

I've personally gone out with my husband who chased two out of town with bear bangers. They kept coming back all night. In this case momma was looking for baby, no food attraction, baby just got lost. Hope they found eachother. Momma bear finally ended up right behind my house, that's too close. She eventually turned around and headed out of town, no animal got hurt.

My one comment to Anonymous is to remember that the communities have tags so you can't just kill all the ones coming into town. Only a few can be shot, usually the one that turns up in front of the grocery store in the middle of the day where there are tons of kids and people. Eat or be eaten I say! ;)

P.S 600mm!!! HOLY CRAP! Make sure you take your tripod with you, camera shake is the worst.

I would like to see "climate change people" come to visit with their shorts, t shirts, sandles and cameras--I'm sure the white outs, howling wind and freezing cold would not bother them, as for the polar bears, most Mom's are toting 2 cubs this year????going extinct----maybe better come and have a Personal look instead of listening to a bunch "TV" journalists in their comfy chairs!!
I personaly know every thing possible is done to keep bears out of the community, both bears and people are kept safe, don't mind my comments, just wish the world woulden't believe every thing on the "news"