Michele and I were out on the Ski-do's today. It's the first good run we've had with them since they were both stolen. Yep both machines were stolen from us last week. We got them back the same morning they were stolen but of course out of fuel and damaged. The four kids responsible for the thefts were caught the same afternoon. One boy is being charged the other is going to community justice and the two girls involved have not yet been charged with anything. Community justice is just a slap on the wrist but at least one of the kids is going to a real court. It is unlikely that we will get any compensation for the damages. Also on a good note we do have both machines running with help from friends and neighbours. Michele's Ski-do is working almost like new and just needs a new windshield. Mine still has a problem with the tread and I think it is just the drive belt. At least that's what I hope is all that is wrong with it. Both of us were lucky the kids just unhooked the ignition and DESS caps instead of cutting them.
.
One of the great things (or bad things..depends which side of the coin you're on.) about living in an isolated, small community is when someone screws up most likely someone knows about it. When we were heading to the tuck, to find the machines, a co-worker of Michele's stopped and yelled out "I know where your machines are and the kids that stole them!". Even when we were fueling up the machines to try driving them home people were stopping to tell us they seen who had stolen them. At least everything ended okay.
Michele standing by her machine a 2009 Scandic 550 Ski-do. 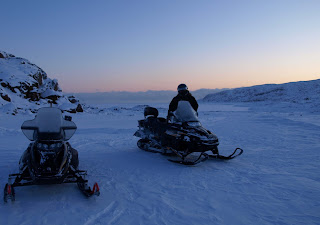 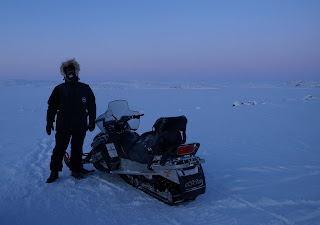 It is very cold on the machine. I have given up wearing a helmet because it fogs up my glasses so bad I can't see where I'm going. The helmet bi-law isn't enforced but it is still much smarter to wear one. 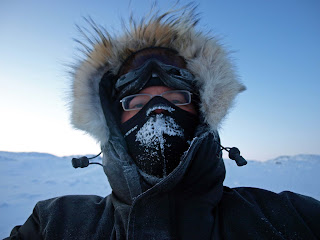 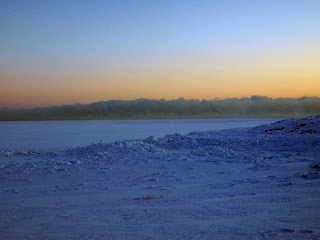 Michele was waiting for me to finish taking photos. 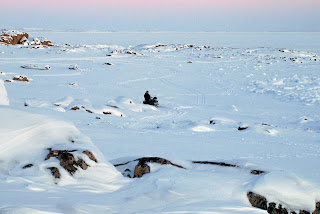 Oh that makes me miss our machines so much! We sold them with the house along with our quads. We will be buying new quads in the new few months, hurray!

We had our machines stolen as well. We hadn't even really taken them out for a ride. They were rat-bagged until they were out of fuel, but no real damage. The teens were caught, but nothing really happened. They had stolen 7 machines in one night. We were the lucky ones. Some had been rolled and one started on fire! After that, we ordered up this honking ass chain and chained them up. No problems after that!!

And in Kugluktuk, the helmet law only applied on quads. They realized it was just too cold for them on skidoos!

Good to hear that your skidoos were recovered - and it is a shame that the 'youth' involved won't really be 'punished' for their crime. Some times up here I really feel that the justice system is letting everyone down.

We haven't had too many skidoo thefts up here this season .. yet (crossing fingers).

Have fun out there skidooing! I only wish we had enough light so I could enjoy it too!

boo on the skidoos being stolen but glad its recovered. we hv tons of those "crimes" here too, pretty sad. kids throw rocks or just hangs on the netkaster dish at Frank's work all the time and they hv to always fly in a tech from YK to fix it.

Congrats, you got your (altered)but manageable machines back. And to me the biggie is they ARE laying charges!!

How do you keep from fogging up?

Glad they're back safe and (almost) sound. Happy trails from here on in, I hope!