When it rains it pours. After trying to get good shots of the Arctic Wolf Spider for a couple of years, in the space of a week I've managed to get several good shots. The first photo below is a shot from above and in front of the spider but the second one is the cool one. 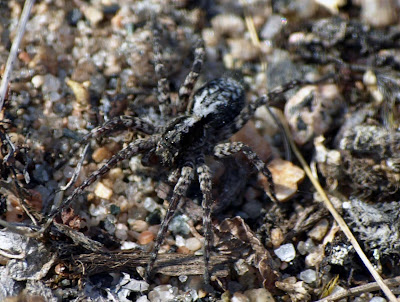 I originally thought I had a bunch of ruined photos. I got to excited when the spider came over the rim of a small pit and he stopped making for a great photo. But due to my excitement and the swarms of harassing mosquito's I didn't notice the grass in front of the spider. Ever photo has a purplish V in front of the spider. I was just closing the last photo when I noticed how clear the front of the Wolf spider was and after zooming and cropping I got the shot below.
Just look at the two big eyes and four little eyes below and the two grabbing and tearing mandibles. No doubt about it now this is an Arctic Wolf Spider. 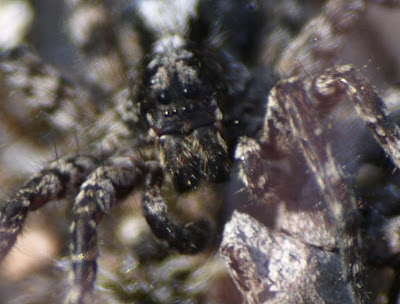 Grooseeeeeeee!!!!!!!!!!!!!!!
Dad says it looks like some of the family, lol.
it really looks like a transula, however you spell it, remind me not to lay down in a field of flowers!
do they bite?? and are they poisnious???

i didn't know these spiders were called. i did find a spider web (my first here) this summer. didn't photograph very well though.