It started with the phone ringing.

Then Michele hollering to get the camera there's a whale in the Inlet. Less then two minutes later we were in the car and heading to the shore. I always keep my camera and gear ready to go because there usually isn't much time to react and plan for events like this.

Once we got there I noticed my battery indicator was showing low battery. No need to panic I always have two fully charged extra batteries with me. With a somewhat smug smile on my face I reached into the camera bag for one of the extra batteries and put it in the camera. I got about 20 feet from the vehicle and was getting the focus set and checking the settings when the battery indicator light started showing low battery again. Now my gut clenches and the smug smile disappears so quick it may never had been there. With a feeling of dread I get the other battery and put it in the camera. Ah utopia this battery is full. Luckily this was the only scary event of the evening. 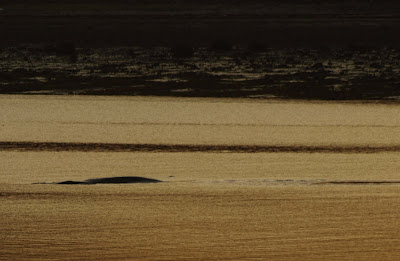 When arriving at the shore we were met by several others to wait with anticipation for the appearance of the whale. Across the Inlet a rippling in the water and the dark, sleek back of the whale breaks the surface of the water with a spray of exhaled air. The surprise and shouts of wonder came next as a second smaller version broke the surface beside the first. A mother whale with her calf. 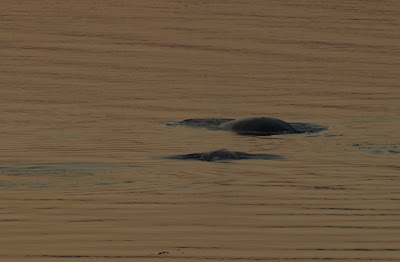 The whales sank down and everyone was speculating on where they would surface again. One older Inuk said they would be circling and heading back out of the Inlet. Sure enough both showed again just down the shore from us. The boats gave a nice contrast on how big the whales are. The same Inuk told me to be patient they always surface at least three times before going under for a long period of time. He was correct rewarding us with more photo opportunities. 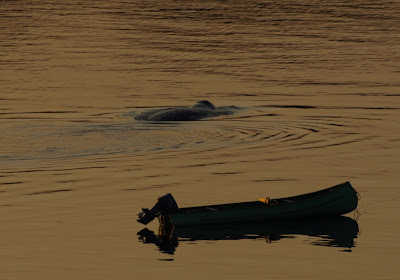 Some were speculating the reason they came into the Inlet was to escape the harassment of a pod of Orcas (Killer Whales). Even though the mother whale is too big for them the baby would be fair game. They would tire the couple out and when the calf could go no further they would use their bodies to force the calf down to drown it. There may be truth to this theory because the two whales were staying very close to shore and were following the line of the island on their way back to the Davis Straight before going on to the Fox Basin. Lets hope the Orcas didn't catch them. I kind of hoped they were just chasing food.
After the whales went under everyone returned to what they were doing before the word went out. Michele and I figured if they were going back out then they have to go by the Park to exit. Back in the vehicle in a tear to get to the park. The whales don't seem to move very fast but after watching them circle the Inlet we knew they would be at the park soon. It was at the park in our ankle breaking pace down the rocks to get closer to the shore that we viewed them on the surface again. This is were I also got the photos of the mother whale with her tail above the water. This was the only time they did it and Michele and I were alone to witness it.

The next time the two surfaced was right in front of us. I had to wait for them to swim off a bit before I could take clear photos. They were so close that I couldn't get my telephoto lens focused on them. What an experience to hear the snorting whoosh of the exhaled breath and the splashing of the water as they surfaced and dove. I even manged to get a photo of the calf blowing air. Not easy given how dark it was getting by now. 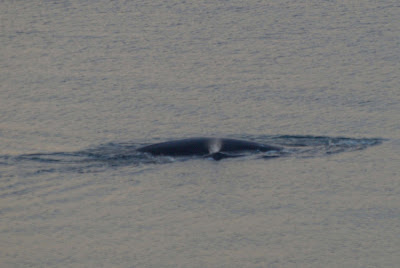 Our screams of delight must have been heard back in the Hamlet because soon after a couple of trucks showed up disgorging people everywhere. They arrived just in time to see the whales just as they came across the island still following the shore. It was the last time they surfaced within sight. I certainly hope to have this opportunity again. 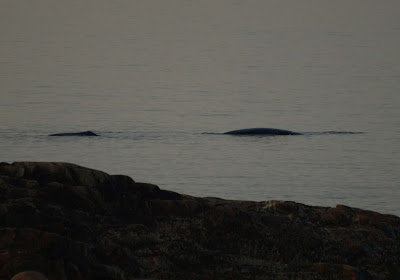 What a wonderful evening. 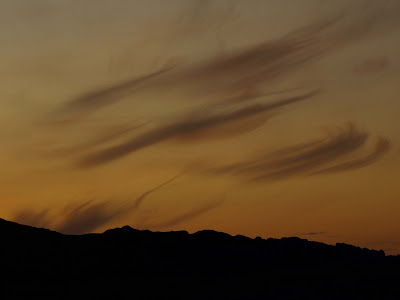 What a great story ~
what lovely pix!
Hope no Orcas behind them...
you were very lucky to see them.
Thanx for sharing.
~ ♥ ~
European Greetings
Beatrice

WOW! That's just incredible. I'm sad I missed it. What a lifetime memory.

Hey Matt, those are amazing photo's, you don't get to take those everyday, great memories. Thanks for sharing with all of us.

Hello Matt, you've a very nice blog. I got the web address from Ken. I just forwarded it to my folks in South Asia. Cheers! Hasan