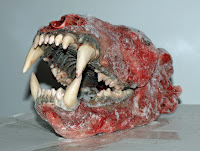 A polar bear was shot recently in town by a 17 year old. The bear had been hanging around town for a couple of days before it was shot. Michele was lucky enough to get there soon after the bear had been brought in and got a bit of video before her batteries went dead. She also got a portion of the hind quarter and cooked it up soon after. I found it tasted a bit like roast beef but was very stringy. Had to get acquainted with the floss. Later Michele was able to get the jaw and hopefully we can purchase the pelt after it has been dried. The bear was shot under licence with the wildlife officer present. A certain amount of polar bears are allowed to be harvested each year. The person who wins the hunting license draw has just two days to get their bear or they can't try again until next year. A bit like moose hunting home.
Posted by Matthew & Michele at 9:44 PM

I think this is so awsome, so Mom are you going to boil all the meat and brains off the skull and make a stew outta it?!
hehe