I sure didn't feel like going out let alone blogging the last couple of weeks. But I'm healthy and happy again and ready to rumble.


So Monday night Michele, Terry (friend) and I went out to the park to see if we could see the Perseid's meteor shower. We still don't have full dark here but the sun dips low enough below the horizon that we get a twilight that is dark enough for the stars to show. This lasts from about 11:30 pm until 3:30 am with the peak darkness around 1:00 - 1:30 am. We were lucky enough to see several meteors that ranged from just points of lights to bright, long tails. I had tried to take pictures of the shower but I wasn't lucky enough to catch any on my long exposures. It seems that Michele and Terry had better luck than me at seeing the meteors. I would be looking in one direction and the other two would be looking in the opposite direction and then I would hear exclamations of excitement. I would then turn in their direction and they would laugh because once again I've missed one. At that time, while they are looking over my shoulder, they would another meteor were I was just looking. I think they were just messing with me. I did get to see several myself so I can't complain to much.


We could see several dim satellites making their way across the sky. Only one was bright enough to catch on a long exposure. It was suggested that I fake it and call it a meteor but it is still neat to catch a satellite with the camera. First time I have got a photo of one on camera. I am usually watching them go by and forget to set the camera up. Photo below.

The biggest surprise of the evening was seeing the aurora borealis for the first time this year. When we first arrived at the park the lights were very bright and were showing red at the bottom. I couldn't get the gear set up fast enough to get a photo. Solar minimum will eventually end. As the night progressed I did get several excellent photos of the auroras but only the green was showing. It was tricky to get the correct exposure because the sky was bright looking towards the north and dark looking towards the south. Once I got it right the effect turned out very nice. Doing night photography is definitely were my passion lies. Of the aurora photos below I had taken 80 photos to get them. Exposure times range from 10' to 40' with each photo requiring the same amount of time on a second exposure to reduce the noise and artifacts from the camera sensors. So if I am using 30' exposures it actually takes a full minute to get one photograph. With set up time between photos I am only getting about 30-40 photos in an hour if the northern lights are cooperating. Luckily you don't need a lot of skill to get great photos of the northern lights they are beautiful on their own. As the nights get longer and colder I will be posting more and more pictures of the northern lights. Enjoy. 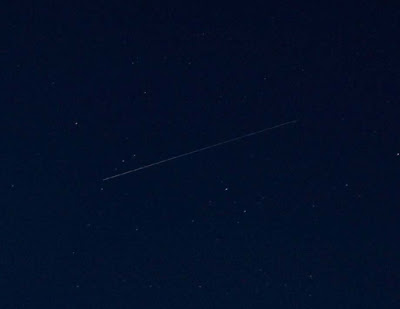 My favorite of the bunch. Looking at the setting sun. 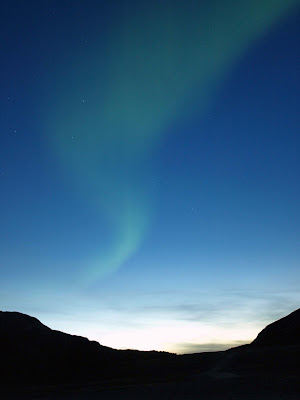 The next five photos are of the same patch of sky taken over a 10 minute period. It looks like a bit of red in the aurora in two of the photos but it could be a trick of the clouds. These are all taken at the same settings and for a 10 second exposure (20sec total see above) and enhanced in photoshop. The bright object in each of the photos is not a star it is a planet. 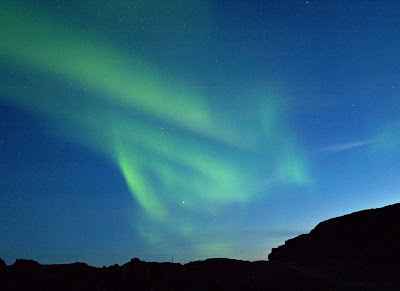 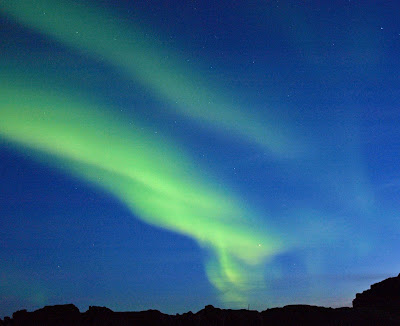 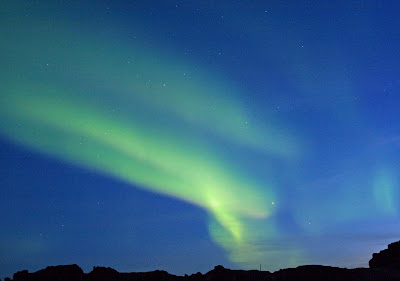 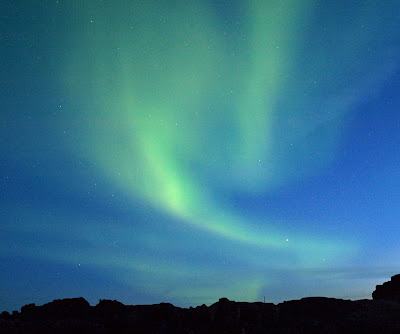 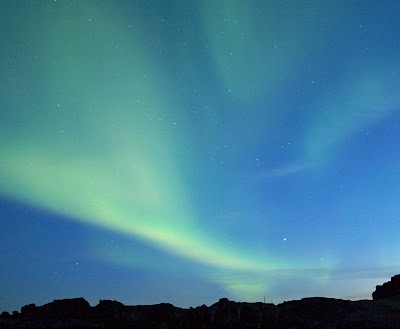 The photo below was just for fun. 40 second exposure with each of us moving approximately every 10 seconds. 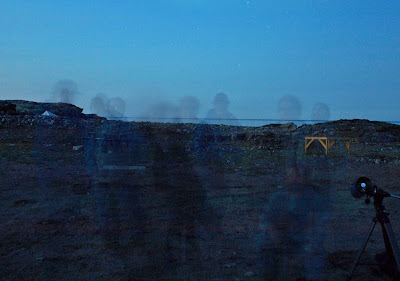 Great photos indeed. Three of us are coming up to Nunavik at the end of September to view the Northern Lights - where do you suggest we go - Cape Dorset or another location. Any and all suggestion appreciated. Robyn

Love the pics and appreciate the time you spend to get them, also love the science lesson and backgrown info, very interesting lesson for us down south(lol!)

What a sight - thanx for posting these photos!