Another cargo ship came in yesterday and left yesterday. Apparently it was unscheduled and several people got surprise wake up calls that their stuff was in and come get it now. Michele and I went out to take photos of the ship but it was gone. The only thing that we had seen was a barge taking some backhall to the ship. So instead of a ship photo you get another iceberg photo. They were the only thing floating around out there yesterday. 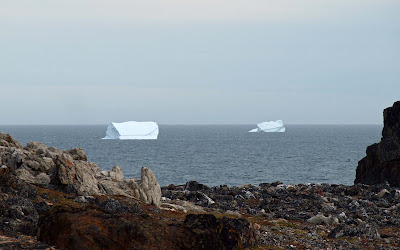 Cool. Thanks for the iceberg photo. I see resupply ships at the loading end of the line, but I've never seen an iceberg in person. We just get these teensy chunk of ice in the lake, just inches above the surface.

Icebergs do have a special attraction for us who don't see them every day - in fact we hardly see them at all.
Have witnessed only 2 blizzards in my life and small icebergs then piled up at the North Sea Shore and at River Elbe!
I like the fine humour you have in your posts, too! Cool.
Beatrice

nice pic, i saw my first iceberg on our recent trip to NL, it was gorgeous!