I do have some very nice photos of Venus and the Moon but I only photographed them in RAW format and can't get them converted into a file format that Blogger likes. Any help and I will post some photos.

Michele and I went on a dump run because we still don't have a garbage bin and it has to get there somehow. The crows were out in full force. Given the amount of unburned garbage and dog carcasses the eating looks good for them. Photo below only shows a small portion of the flock. 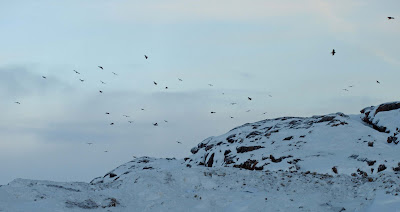 Once again we have an ice fog floating around town and with the sun still low in the sky it makes for some great atmospheric effects. Below is a photo of a sun pillar and an upper tangent arc. There were also some great sundogs but I was to busy being a tourist and forgot to run back into the house to get the camera before they were gone. Neither were accompanied by a 22deg halo. 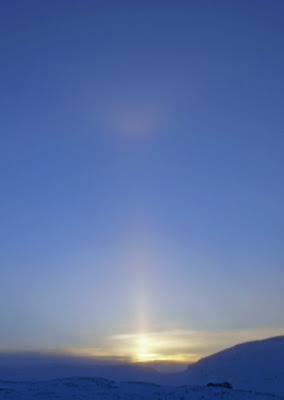 I will be on duty travel this week so I probably won't get a chance to post until next weekend. I will see if I can get some nice photos from Pond Inlet. Hope the sun is up high enough.
Posted by Matthew & Michele at 3:38 PM

Great shots! Can't wait to see your view of venus and the moon.