I had to take some garbage to the dump and as usual my camera went with me. The ice is starting to break up and move out of Tellik Inlet. I was told today that the pack ice has moved back in and has blocked access to the open water for a couple of kilometers. He was telling me that every so many years this happens and it could be until August before it moves out and allows access to the open water.

I know I used the line "...every so many years..." but the Inuit have no way to describe exact time in their language and it makes it hard for them to describe the passage of time in English. I had thought the so many years meant approximately once every five years or so but then he mentioned "when he was young" so we could be talking decades. I am thankful that they will tell me in English because my grasp of Inukitut is embarrassing.

The photo below is of the land bridge to Mallik Island. You can see in the close up in the second photo that the ice has broken up and is starting to flow out of the inlet. Of course it will not get far since the pack ice will stop it. 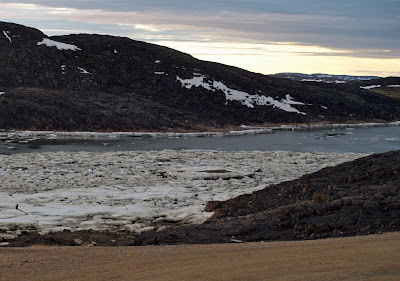 I am not as brave as these folks on the Ice. The open water is between the hamlet and the ice they are on. In the photo there is a snowmobile and kamatik to the left and a canoe to the right of center. 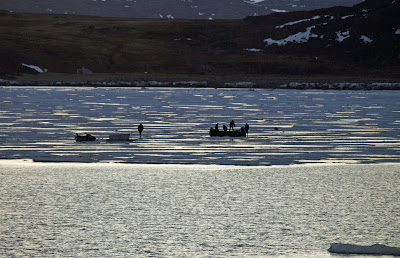